Menu
CALL US
EMAIL US
Menu

Meralgia Paresthetica is a constellation of symptoms caused by a compression neuropathy (pinched nerve) of the Lateral Femoral Nerve (LFN). The LFN arises from the second and third lumbar spinal levels (L2,L3). As the LFN travels from the spine to the thigh region, the nerve can be pinched at the anterior pelvic tunnel. This tunnel is made by the bone of anterior superior iliac spine, the dense fibers of the inguinal ligament and overlaying musculature. Pressure on this nerve causes feelings of burning, pain and numbness along the front and lateral part of the thigh, extending all the way from anterior and lateral hip, groin and gluteal area to the knee. In some, there can even be very deep groin and testicular or labial pain. 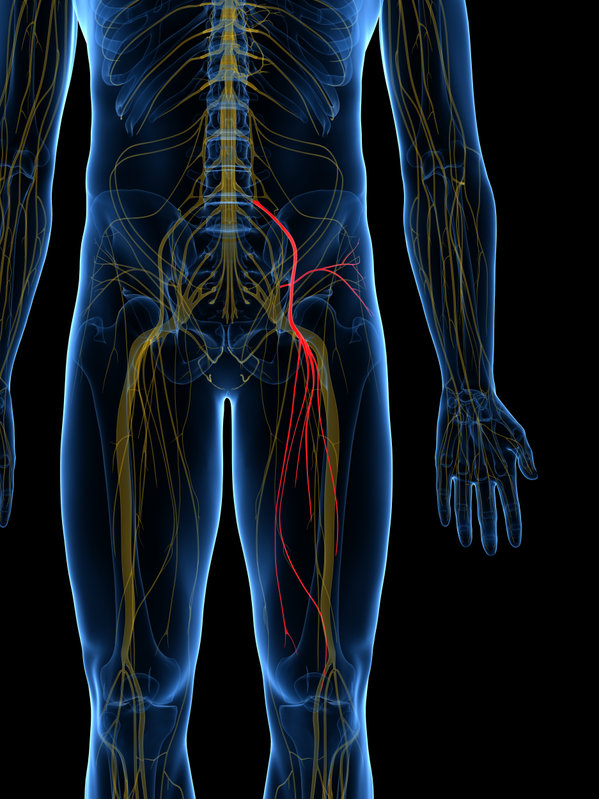 It is not uncommon for the severity of symptoms to be significantly debilitating, especially if the problem is not addressed. It is important to understand that this a very treatable problem. Its like having carpal tunnel of your hip. Early or old teachings that suggest there is nothing to do, still permeate the medical community regarding this problem.
This compression neuropathy (pinched nerve condition) can be caused by several different mechanisms. Anatomical studies have shown that at least 5% of the population has an abnormal nerve tunnel. This anatomic variant is highly vulnerable for compression but any nerve can become compressed or damaged. History of pelvic fracture, Blunt trauma in or near the nerve and tunnel, can cause direct trauma to the nerve or trauma to the surrounding tissues that leads to compression of the nerve as well.
Even just having surgery in the area of the hip, groin or abdomen can lead to changes in the tissue surrounding the nerve and lead to compression. Prior hip surgery, hernia surgery, bone graft harvest, cesarean sections are some of the most common.
Some professional activities (i.e. police officers, firefighters and construction workers, etc.) require wearing heavy and loaded belts around the waist. This exposes the nerve to excess and repetitive pressure, especially if anatomical nerve path abnormalities already exist. Various sports like karate/kickboxing, football, soccer, rugby and others can all produce injuries that result in this problem. Body habitus such as abdominal obesity or pregnancies can also contribute to repetitive stress and stretching of the nerve.
It is also important to recognize the affects of diabetes on this clinical problem. Diabetic patients, due to abnormal glucose metabolism, may develop swelling of the nerve, as well as narrowing of the tunnel itself. This alters the normally perfect relationship between the nerve and its tunnel, making it now too narrow for the more swollen nerve, resulting in lateral femoral cutaneous nerve neuropathy. Therefore, diabetic patients are at much higher risk for experiencing symptoms of Meralgia Paresthetica than the general population.
Once you have been identified to have symptoms consistent with Meralgia Paresthetica or compression of the Lateral Femoral Nerve (LFN) several diagnostic points should be addressed. In some cases, lower spine or lumbar spine pathology should be ruled out with an MRI. This study can also include a study of the pelvis to rule out any mass or tumor causing compression to the nerve along its course. Ultrasound guided, site specific, diagnostic injections are routinely utilized for confirming the diagnosis. In some cases, the addition of steroid to this injection can provide symptomatic relief for some variable length of time. If there is no spinal or pelvic pathology and the severity of symptoms are not too severe, conservative care is a very appropriate initial treatment. This may include: nerve modulator medicines (i.e. neurontin, amitriptyline, etc. ), topical compound cream, lifestyle changes, weight loss and physical therapy. If conservative therapies have been tried and fail after 3 months, surgical decompression should be considered. Accessory treatment modalities such as radio frequency ablation(RFA), sclerosing or spinal cord stimulators do not treat the problem and should not be utilized for this clinical problem.
Surgical decompression of the nerve is successful in 80-85% of cases. In the residual population that fail decompression, 80% of these patients will respond to going back and resecting (neurectomy) the nerve.
The success of the surgery depends on how long the nerve has been compressed, the severity of the compression, the extent of nerve damage due to injury and the possible presence of underlying medical or spine problems.

The surgery performed in an outpatient setting. The surgical incision is generally very small, however body habitus can dictate a larger incision. The post-operative course is consistent but is affected by the amount of decompression required. In general, people can return to light duty work after 2 to 3 weeks and unlimited/unrestricted activity at 6 weeks. For more information on Meralgia Paresthetica and ways it can be treated, visit https://neuropaxclinic.com/ and call 314-434-7784 for more information.